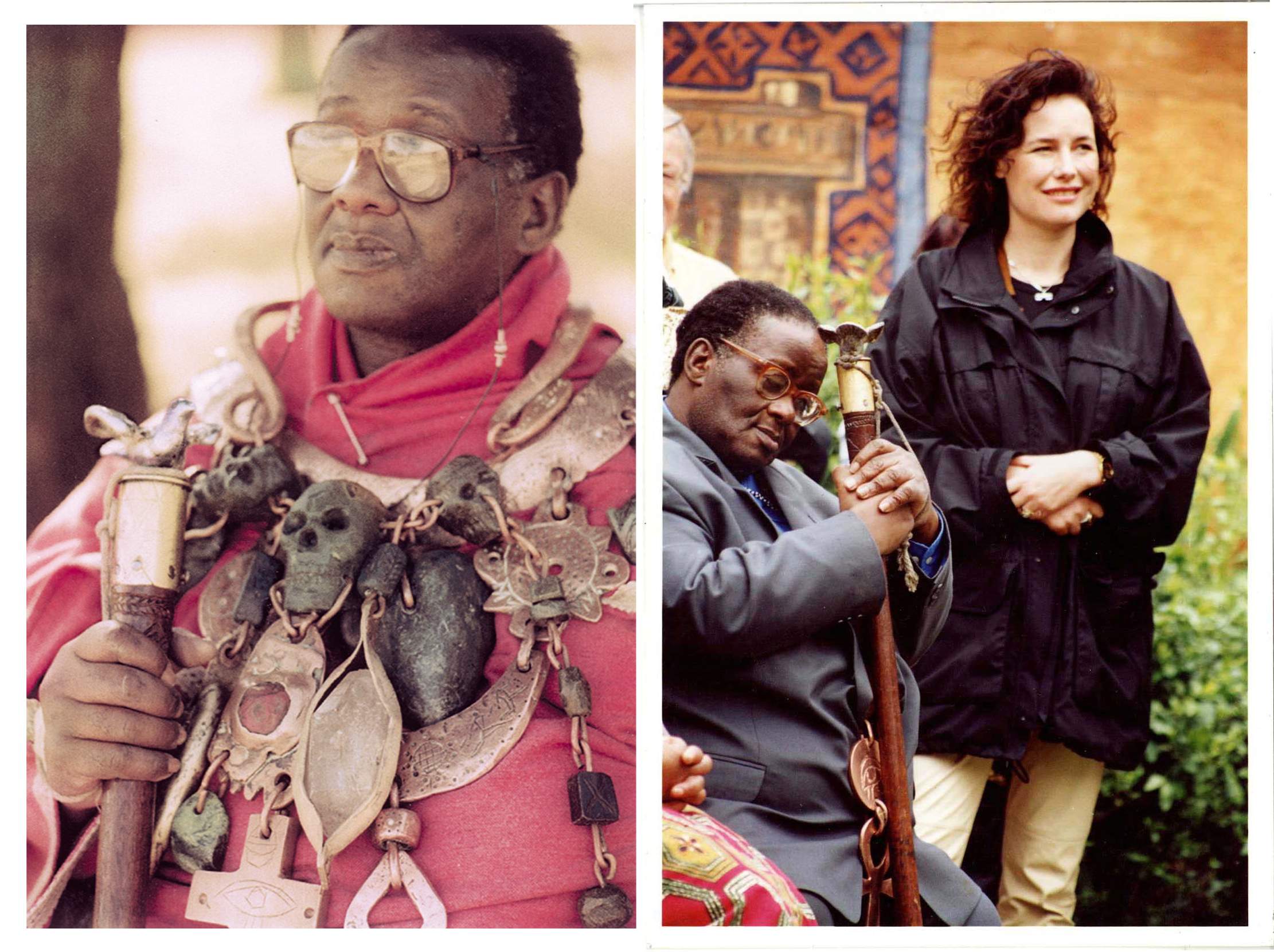 Credo Mutwa, my great mentor, the living library of Africa, died this week –  at a time when our planet is in most desperate need of his sage wisdom. He would have turned 99 on 21 July this year.

Here in the Heartlands, where his wisdom lives on not only in words but in LionHearted action, I feel a deep sense of Love and Respect for this monumental figure, who spoke Truth to power.

What a monumental soul, finally relieved of his physical burden, and the great karma he has carried not only for Africa but for humankind, as a tortuous physical burden, freed from the confines of his body. We will always celebrate his hard-earned freedom, and the involutionary path he has opened in our critical modern times for humanity to return to the most ancient knowledge systems that will restore right relationship with our planet. The Son of Ra, a great family member of the luminous StarLions, will live forever in the Heavens.

Below is the Foreword that Credo wrote for my book in 1999, when he urged me to send the message of the White Lions out into the world as a matter of critical urgency, endorsing my view that these luminous animals were bringers of enlightenment and peace to the planet. He referred to them as “Star Beasts” and recognized that their role in the Heavens was equaled by their mission for Mother Earth. It is deeply moving to read his words to human kind reflecting on the injustices inflicted on these sacred animals.

A voice rises from the parched valleys of my ancient motherland, a lonely voice above the hills of eternal Africa, an appeal to those who do not care, to those who have no ears. A plea to those who choose to be nothing in the face of monstrous evil:

Leave the lions of Timbavati alone. Do not destroy the sacred lions of the Gods of Africa.

This is the book that Linda Tucker has written.

No-one in their right mind would ever travel to India, and massacre the white Brahmin cattle that roam the crowded streets of India’s cities. No-one in their right mind would ever travel to Siam and there murder the rare White Elephants that we find in that country. But people come to my motherland, people come to South Africa, to brutally murder the White Lions of Timbavati in the name of manliness and in the name of sport. The sacred icons of other races and nations in this world are respected, revered and protected. But the icons of Africa are massacred with cold impunity, sometimes with the connivance of some of Africa’s own children.

I understand, much to my sorrow, that there is not a single White Lion left in the wild. And I ask myself: Did we win our freedom for this? This quiet devastation of our country’s most sacred animals? Did we, by joining the ranks of the democratic countries of the world, also join those people who see it as their task to denude this planet of all life? I want to join Linda Tucker’s appeal. I say: Please. Leave South Africa’s White Lions alone. Let them breed once more. Let them walk tall in the wilderness which is their mother.

In the past two hundred years or so, the human race has lost much which is of importance in Africa. And it continues to lose much. But what is most terrible, what is most tragic, is that it does not realise what it has lost. One day, in the dark valleys of the future, people will try to turn back, people will try to investigate, to look into the past of African humankind with wide open eyes, but they will find very little because much has been obliterated.

When an animal is killed in Africa, that animal takes a large slice of African knowledge into oblivion with it. Because most of the knowledge that Africans possess is intimately intertwined with the animal life as well as the plant life of this continent.

Let this young woman’s plea for the preservation of the White Lions of Timbavati be heeded by this world. I pray and hope that the readers of this book will take it to their hearts, and themselves investigate many things that she here reveals. Because the diamond that you have found yourself, the diamond that you discovered in the red rubble of Africa, is ever more precious to you than the polished one that you find in the marketplace. The truth that you discover yourself is more indelible than a truth written to you or for you by someone else’s pen.

Take this book to your heart, and let it guide you to even greater truths about Africa than have been here revealed.

Why would Africa’s greatest ancestral wisdom keeper depart at this time, when our planet is in most desperate need of his sage wisdom? Credo Mutwa spoke truth to power. One of those deep truths is that Covid-19 has achieved in two months what international conservationists and animal welfare activists have been trying to achieve for decades.
Click here to read Linda’s published article in the Daily Maverick, which explores Baba Credo’s message for humanity at this time of global standstill.