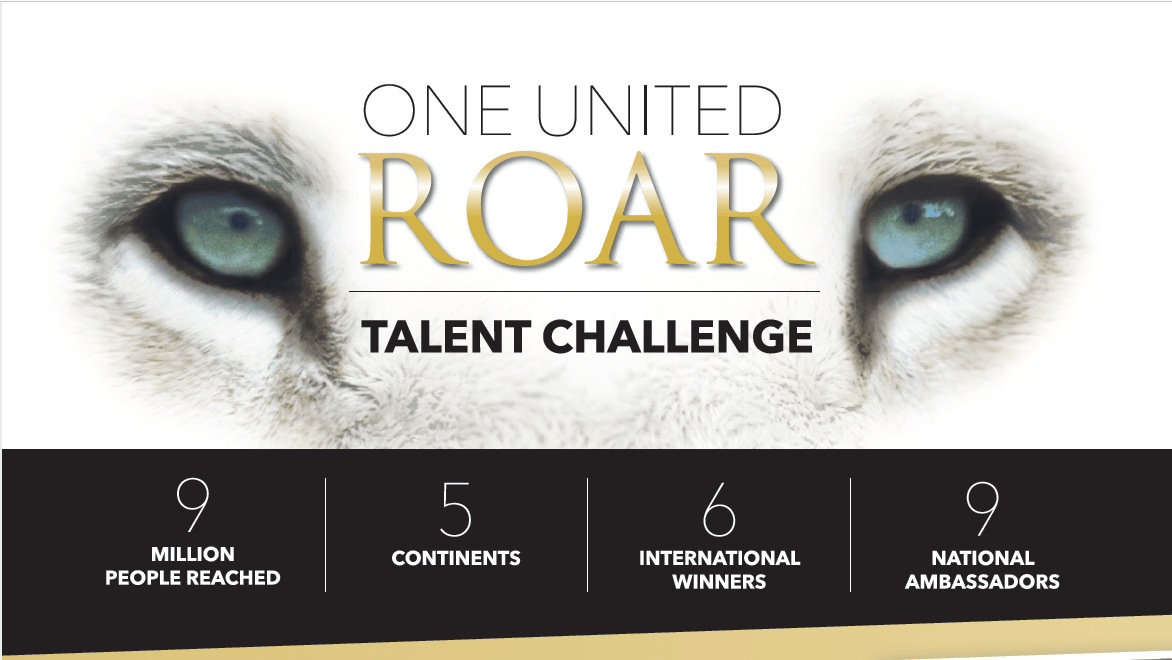 Children of the World Deliver One United Roar for Lions

Kruger to Canyons Biosphere: Friday 10th March 2017: Six young leaders have conquered a Global Talent Challenge and won a trip to South Africa to see the legendary White Lions of the Timbavati, worth R100 000 per winner. The six, from Hawaii, Canada, Israel, India, UK and South Africa, will join nine local StarLion Ambassadors in a talent bonanza at Crawford College, Waterstone Drive, Sandton, in a one-night-only celebration – with a serious message – on Thursday 30 March 2017.

“Until the Lion learns to write, the story will be told from the Hunter’s perspective.”

This is the old African proverb that prompted the One United Roar Talent Challenge, an initiative driven by the Linda Tucker Foundation and hosted by the Global White Lion Protection Trust and PAL (Protecting Africa’s Lions). The talent challenge asked youth worldwide what they thought it would feel like to be a lion today, at a time when the South African government is legalising the lion bone trade in a notorious captive breeding industry recently referred to as “Blood Lions” or “Canned Lion Hunting”. This followed the Convention for International Trade in Endangered Species (CITES) held in Johannesburg in October last year, which was widely criticised by conservationists for promoting pro-trade rather than protection policies for endangered species.

The campaign, which reached nine million viewers, and was judged by a panel of international celebrities including “Game of Thrones” star – Jerome Flynn; Hollywood Director – Sheryl Leach; and our very own Miss Earth South Africa Ambassador, Nthabiseng Tsoamotse, attracted submissions from around the world and drew the attention of Hollywood talent scout, Sydel Lisi, as well as several of her top Nickelodeon stars.

LionHearted youth expressed their views through dance, song, poetry and many other creative channels, telling authorities what the lions think of their legislation.

Linda Tucker, founder of the Linda Tucker Foundation says: “Lions are the ‘silent stakeholders’ in policies that determine the fate of their species. Currently, it is legal to hunt lions in the wild, to hunt them in cages (in the cuddle-and-kill industry), and now to treat them as living carcasses, starving to death and then a quota of as many as 800 dispatched into the same Asian market that is killing our rhino. Through the voices of the future – next-gen youth leaders – this campaign finally gives our lions a voice and a vote,” says Tucker.

After 3 decades of campaigning for the protection of lions as a living heritage, last month  Tucker decided to take a stand not to attend a stakeholder meeting in Pretoria where a quota for the lion bone trade was to be decided. Jason A. Turner, Specialist Lion Ecologist for the Global White Lion Protection Trust delivered a scientific perspective opposing this industry, not only on ethical grounds but also on scientific grounds.

Turner says: “Since this legislation came into force, statistics show that the number of poaching incidents have radically increased. Legalised killing of our lions and illegal poaching have become synonymous.”

The nine Local StarLion Ambassadors were selected from rising talent in the StarLion Centres in the Tsonga and Sepedi communities neighbouring the White Lion’s ancestral heartlands. These StarLion Centres are cultural hubs, where LionHearted Leadershipä skills are fostered and where the White Lions are celebrated as a proud living heritage. The StarLion Ambassadors will be hosting the international winners on a 7-day tour, which includes media interviews as well as visits to local rural communities in the Kruger to Canyons Biosphere, the only place on earth where the White Lions occurred naturally. It finally culminates in the Johannesburg event on 30 March.

Refreshments will be available.

Linda’s new book LionHearted Leadership: The 13 Laws will be on sale in a limited, collector’s edition