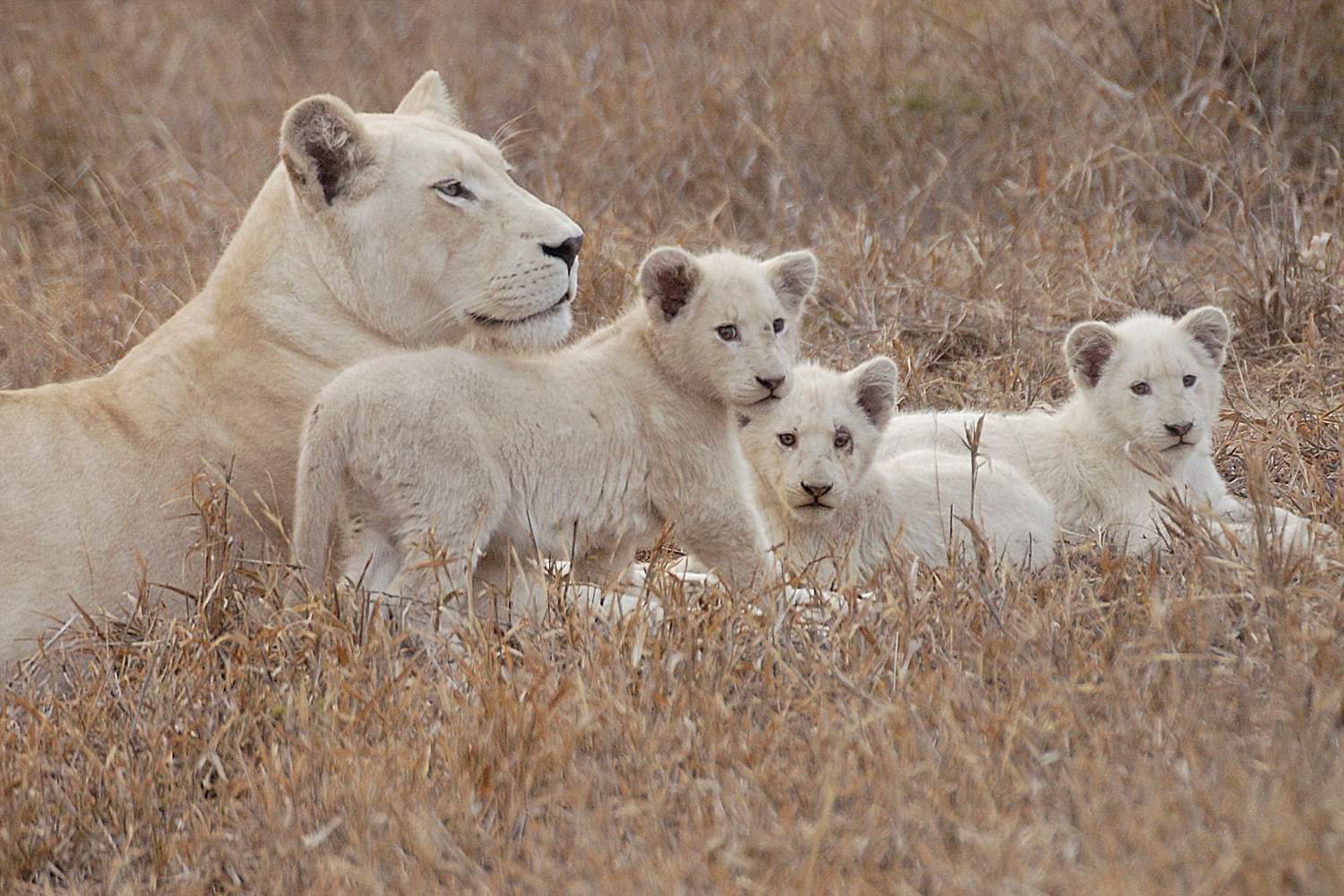 1. Are the White Lions 'albino lions'?

Turner: No, they are not. White colouration in White Lions is similar to blue eyes in humans, which is also due to a recessive gene.

2. Where do White Lions originate from?

Turner: The White Lions occur naturally in South Africa, and have been sighted in the Greater Timbavati and southern Kruger Park region.

3. How did White Lions disappear historically from the Timbavati and Kruger National Park.

Turner: After they were ‘discovered’ by Europeans in the 1930s, White Lions were artificially removed from the wild to captive breeding and hunting operations. Along with these removals, lion culling in the Kruger National Park and trophy hunting of pride male lions in the Timbavati, depleted the gene pool.

4. Once the genetic marker is known, how can this research protect the White Lions?

Turner: ALL lions in the Timbavati region may be better protected, because the genetic code proves that they are a sub-species, not an accident of nature.

5. Are the White Lions currently classified as an ‘endangered species / animal’?

Turner: No, they are not classified endangered simply because they are not yet appropriately classified. Presently, the White Lions are listed as Panthera leo, which is classified as ‘Vulnerable’, meaning they may become threatened with extinction in the future, unless trade is closely controlled’.

6. Why are White Lions not classified as ‘endangered and officially protected if they are so rare in the wild?

Turner: White Lions are classified as Panthera leo, which means they are not recognised by current scientific labelling as being ‘different’, and are therefore not protected by law. This means they can be hunted or traded to extinction – although there are less than 13 White Lions in the wild in their natural habitat. The White Lion gene needs to be researched, understood and protected, as a matter of urgency. In terms of current scientific classifications and methodology, this requires an up-listing of the conservation status of lions in South Africa from CITES Appendix II to Appendix I.

7. Is there any ‘evidence’ indicating that White Lions can be classified as a sub-species?

Turner: Some geneticists / scientists oppose sub-classification, believing that everything should be ‘lumped’ together as a single species. Others support sub-classification, arguing that “to protect the whole you need to protect all the parts”. Identification of the special White Lion gene is evidence that they can be classified as a sub-species.

8. What is the main focus of the Global White Lion Protection Trust?

Turner: The primary aim of the Global White Lion Protection Trust is to re-establish White Lions in the area in which they once occurred naturally. This is undertaken as a carefully phased scientific programme, in strict accordance with current conservation principles.

9. Their white colour makes them conspicuous in the wild – can White Lions camouflage themselves in order to hunt for themselves?

Turner: Yes, the Greater Timbavati region in South Africa is characterised by white sandy riverbeds and in the winter, the long grass in this area is scorched pale. In this habitat, which is their place of origin, they are very well camouflaged.

10. How do the White Lion Trust’s objectives fit into those of the IUCN (International Union for Conservation Nature)?

Turner: Our research objectives are in alignment with those of the IUCN:

i) we aim to restore the natural biodiversity of the area;

ii) we aim to enhance the long-term survival of a species;

iii) we aim to provide long-term economic benefits to the local community;

iv) we aim to re-establish a capstone species in both the ecological and cultural sense; and

11. You indicated that the Global White Lion Protection Trust is following precedents to classify the White Lions. Can you elaborate?

Turner: Like the White Lion, the so-called  ‘Spirit Bear’ (aka the Kermode Bear, Ursus American Kermodei)is a unique genetic variant of the Black Bear and occurs in only one place in the world: the temperate rainforests of British-Columbia. Also, like the White Lion, the white coat of the Spirit Bear is believed to be the result of a double recessive allele (gene). The Spirit Bear has significant cultural importance to the First Nations’ Kitasoo People, and has been protected by law with 220 000ha set aside for their protection. We are using this precedent in our campaign to reclassify White Lions.

12. What evidence exists to show that the Global White Lion Protection Trust’s 'Scientific Reintroduction Project' has been successful?

13. Some say the White Lions in your Reintroduction Programme are being ‘bred in captivity’ because the lions are kept in cages? Is this true?

Turner: No, the White Lions participating in our project are not kept in cages. This would oppose everything our project stands for. The White Lions in our Reintroduction Programme have been reintroduced to free-roaming conditions in a 2000ha wildlife area, in their natural endemic habitat in the wild. The Reintroduction Programme is in line with current strategies for lion conservation that follow the “meta-population” management approach, which is already in use in other parts of southern Africa. In order to completely introduce White Lions back into the wild, and to ensure genetic diversity, the White Lion Trust aims to establish and manage a number of separate sub-populations, before reintegrating the White Lions with resident tawny prides within the Greater Timbavati / Kruger Park Region, when internal fences are eventually dropped to form the Joint Protection Zone (JPZ) bordering onto the Kruger National Park.

14. How do you monitor the progress of the White Lions in your Reintroduction Project?

Turner: Our scientific monitoring team records the behavioural and hunting patterns of the White Lions every day during their peak activity periods. The lions are radio-collared so we can always track them and note their patterns of behaviour. The lions are never approached on foot. We follow a strict scientific protocol, and any visitor to the project must be accompanied by a member of the monitoring team. The cubs are raised by their mother, and are never approached or touched.

15. Can one expect any casualties in your Reintroduction Programme?

Turner: With the risks involved in hunting in the wild, lion mortality is high – up to 80% of lion cubs do not survive to become adults. Risks include injury whilst hunting large prey such as buffalo or giraffe, poacher’s snares and even disease (such as Bovine Tuberculosis). Despite a few casualties, the Global White Lion Protection Trust has successfully released three White Lion prides, and all of the cubs of our founder White Lions have survived to adulthood.

16. When were White Lions last spotted being born wild in the Timbavati region? Can any lion produce white offspring?

Turner: In May 2006, after more than a decade had passed without sightings of White Lions, two White Lion cubs were born – amidst tawny cubs – in the Umbabat Private Nature Reserve (neighbouring Timbavati). In October 2006, another two white cubs were born at Tabby’s Crossing in the Timbavati Reserve. Unfortunately, none of the white cubs – or their tawny siblings – survived. At the best of times, the survival rate of lion cubs to adulthood is only 20%. However, these cubs faced additional challenges, since their likely father was trophy hunted, and the prides in the region faced infanticide. In 2014, the first white cubs were once again born in the Kruger National Park (Nwanetsi-Singita Lebombo Concession) – a region in which there is no lion trophy hunting, so there is much hope for the long-term survival of White Lions. Despite the continued commercial trophy hunting of lions in the Greater Timbavati region, there have now been several occurrences of White Lions over an extensive area, proving the conservation value of this rare phenotype to the biodiversity of this wilderness region.

17. When were White Lions first spotted in the wild, and how many are there worldwide?

Turner: They were first spotted in 1938 and photographically documented in the 1970s, although African records indicate they were resident in this region for a much longer period. Due to artificial removals from this region, there was a period of virtual extinction. However, between 2006 and 2015 there have been 15 births of White Lions in the Timbavati-Umbabat-Klaserie Private Nature Reserves, and 2 births of white cubs in central Kruger National Park. There are currently less than 13 White Lions living in the wild. Interestingly, this coincided with our introduction of Marah and her cubs into free-roaming bushveld conditions in the heart of their endemic territories.

18. Has anyone else ever tried to reintroduce White Lions back into the wild?

Turner: Yes, there were two attempts made by the Timbavati Private Nature Reserve themselves: the first was in the late 1980s, and the second took place in 1993. Sadly, reintroduction techniques were not as sophisticated as they are today, and those attempts failed.

19.Will the White Lions in your project ever be in contact with other lions?

Turner: Yes, they will. The Global White Lion Protection Trust has already integrated the reintroduced White Lions with wild tawny lions in our extended wildlife area. Our ultimate goal is to once again integrate the wild-born White Lion offspring into the Greater Kruger Park lion population.

20. What is your response to the so-called ‘purist’ scientific view that 'nature should take its own course'?

Turner: This term ‘purist’ is inaccurate. In reality, there are very few ecosystems today that are not, in some way, managed. This applies to the Associated Private Nature Reserves (APNR) bordering the Kruger National Park, which have intervened in the natural system in many ways, including through firebreaks, road and other infrastructure as well as the commercial trophy hunting of lions and other members of the so-called Big Five over several decades. Even the Kruger National Park itself, in spite of being greater than 20 000km2, is not an entirely self-contained system in nature. It is managed: ie. vegetation is burnt on a rotational basis; species are translocated to and from the national park, tarred roads and tourist camps have been constructed, and it is fenced without full consideration for the Source waters. In this way, and others, Nature’s balance has been disturbed through human intervention, and our role is to responsibly restore it.

21. What are the 'critical next steps' to having the White Lions protected?

Turner: The more knowledge we gain, the better chance of changing legislation and having lions protected. White lions need to be reclassified on the Schedule of Threatened & Protected Animals of National Importance, and we need to research just how often this white gene occurs in the Greater Timbavati / Kruger Park Region of UNESCO’s Kruger-to-Canyons Biosphere. We will use this information to better protect all lions in this region.