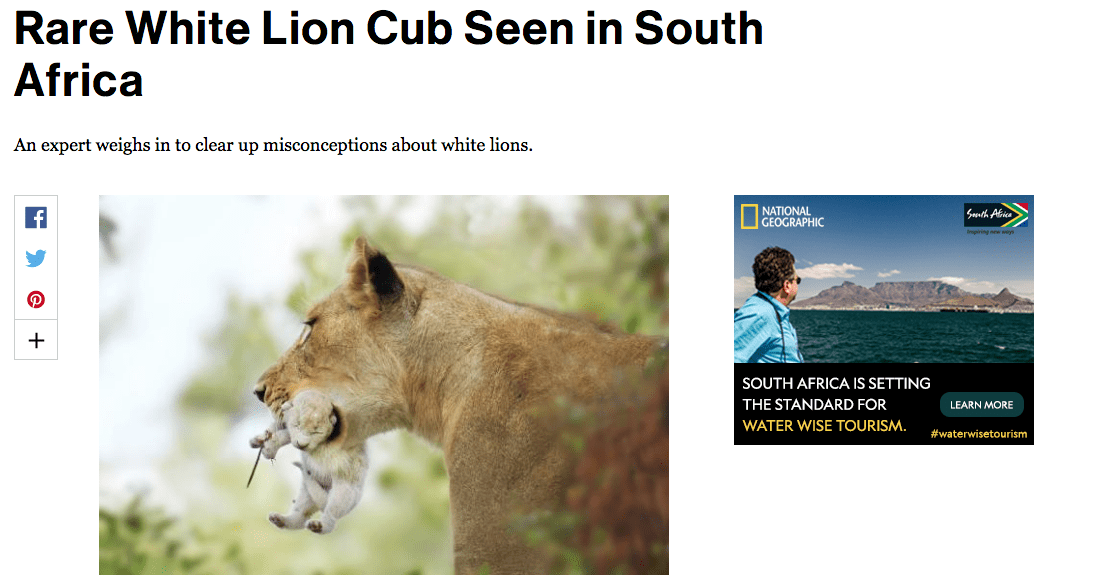 After a new-born white lion cub, together with its tawny siblings, was photographed in a den site in Timbavati, caused international speculation on it’s prospects for survival, scientific authority Jason A. Turner was compelled to address long-standing inaccuracies around this genetic rarity, which has been under stress in its natural system through commercial trophy hunting and forced removals over many decades.

Under pressure from this most recent tourist intrusion, the nursing lioness was forced to relocate her new-borns to another site.

Below is the letter that Jason has written to the author of the article:-

I am a lion ecologist, whose studies of the lion prides of the Greater Kruger-Timbavati Region date back to 2000, currently undertaking a PhD on “The Ecology, Genetics and Cultural Importance of the White Lion in South Africa”.

I am also Director of Ecology and Conservation for the Global White Lion Protection Trust.

With reference to your recent article “Rare White Lion Cub Seen in South Africa”, please find important facts below and attached, with corrections to popular misperceptions and misinformation:

In 2015 I published the results of a 10 year scientific study that proved that free-roaming white lions hunted as successfully as tawny / golden / ‘normal’ coloured lions in the same study area (Turner, Vasicek & Somers 2015 – http://www.open-science-repository.com/biology-45011830.html )*1.

Further evidence of the hunting ability of free-roaming white lions is recorded in the book by Mario Cesare (2011)*4, the wildlife documentary filmed at Timbavati Private Nature Reserve (http://www.pbs.org/wnet/nature/episodes/the-white-lions)5, as well as wildlife manager reports from Sanbona Wildlife Reserve and Pumba Private Game Reserve, in South Africa.

To my knowledge, there is no scientific data available to suggest otherwise.

This scientific article is the only published scientific research specifically on white lion ecology and hunting ability, and attached are photographs which indicates white lions camouflage in their natural environment. As scientific evidence this should be included with the expert opinion of Dr Paul Funston, to provide the National Geographic reader with access to all available research on the topic.

Also of importance to the informed National Geographic reader is the cultural significance of the white lions to the indigenous Tsonga and Sepedi Communities of the Greater Kruger Park Region (Tucker 2003)*3, making them an ideal capstone animal to mitigate human-lion conflict and lion poaching in the Greater Kruger Park Region, thereby helping to protect the wild lion population in this region.

Finally, of importance is an appreciation of the challenges faced by white lions in an area which has seen commercial trophy hunting of lions for many years, as well as repeated artificial removals of white lions from their natural habitat dating back to Operation White Lion in 1981, and before.

The rare occurrences of the white lion in their natural environment attracts an influx of tourist interest, creating additional stress for both mother and her new-born cubs, in this case only a few days old. Having been a game ranger / guide at several game lodges for nearly 10 years, including the AndBeyond Lodge, Phinda Resource Reserve, our policy and responsible code of ethics ensured that lodge guides would not view den sites with or without tourists, until the cubs were at least 3 to 6 weeks old, the age-appropriate time at which a nursing lioness would introduce her cubs to her pride.

These facts, too, would be of importance to the informed National Geographic reader.

Thank you for your time in reading this email, and my appreciation for your assistance in making these facts available.

*2. Valeix, M. (2015). Review of “Effects of a colour variant on hunting ability – the white lions in South Africa”: http://www.open-science-repository.com/review-of-the-article-effects-of-a-colour-variant-on-hunting-ability-the-white-lion-in-south-africa.html.

* Mutual benefits for Lions, Land and People in the greater Kruger area.
* Restoration of ecosystems and human value systems.
* Cutting-edge science and ancient indigenous knowledge unite to save the species.
A leadership model for sustainable living.

Disclaimer: This message is subject to the disclaimer posted on our website.